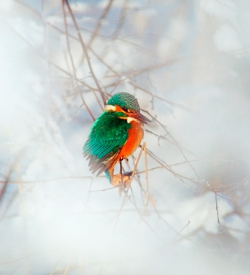 Years ago I visited Taevaskoja for the first time, on a school field trip. There I managed to spot a beautiful blue bird flying over the river, carrying a piece of ice in its beak. That is what the tiny fish looked like to me at the time. Now, years later, I still visit Taevaskoja a couple of times a year. Something seems to be drawing me there. Is it dippers, kingfishers, otters, beavers? Certainly them as well.
Remo Savisaar (nature photographer)

No other living creature in Estonia is anything like the kingfisher. It is about the size of a sparrow, has a very short tail and a long, sharp beak. It is easily recognizable even by its silhouette alone. The back of the kingfisher is in various shades of blue: the tail, wings and head are darker, but the middle back is almost a glowing blue. Its belly is orange, the hue of the sandstone cliffs. It’s the bright blue colours that have inspired its nicknames – northern jewel or river pearl.

It is believed that the bright colours are not meant to make the bird stand out, but rather as a means of camouflage. The blue of the kingfisher fades into the sparkling reflections of the water's surface and the orange feathers match its common nesting location, the sandstone cliffs.

Although the kingfisher is very brightly-coloured, it is still not easy to spot and observe it. It is a tiny and very cautious bird, who usually takes off in flight as soon as it spots a human in the distance. And it flies very fast. Its flight speed is between 15-20 metres per second and thus you can only catch a glimpse of a colourful spot when it flies by. It has no distinctive song.

The best places for spotting kingfishers are on South-Eastern rivers and other rivers with sandstone cliffs. The most famous of these places is Taevaskoja on the Ahja river. The largest population of kingfishers in Estonia has also been found there. Ornithologist Eerik Kumari estimates that in 1938 as many as 15 bird couples were nesting on an 18 kilometre stretch of the river. The kingfisher regularly stays in Taevaskoja over winter.

The data is displayed using the data base of www.visitestonia.com